I love squareamerica.com (on Facebook here) and was greatly amused to find one of the photos in their "A Brief History of Skirt Raising" album shows a woman wearing heels nearly identical to Re-Mix's Rita Heels, which have been on the top of my "Must Buy" list for some time.

It's no secret that navy blue dresses are really difficult to sell, but is it the same for lavender dresses? It appears so, as this lovely Franklin Original dress I have gets no attention in my Etsy or brick and motor store. Too pastel? I don't wear lavender myself, but this dress from maevintageinc makes me wish I did:

Oh why aren't you black, dress?! You are so perfect. Exactly my size and style, except for the color. A very good price too. I'm really surprised it hasn't sold. So is this just a coincidence, or is nobody a fan of wearing lavender?

I Do What I Love

I got Lola Talleya friend. She's from a 1944 child's sewing kit, the kind that come with tiny patterns and little pieces of fabric to teach young girls how to sew. I love her, she reminds me of a store counter display so she's living on the counter of my store.

Speaking of the store, last month was its one year anniversary. I was sick and didn't do anything special, but it felt really good to reach that milestone. Here's to many more...
posted by Lisa at 6:10 PM 2 comments:
Labels: my finds, the store

This is Not a Lucite Purse

This is a plastic sewing basket (the plastic seams are a dead giveaway). You see these on Etsy, you see them on eBay, you find them in antique stores and the seller ALWAYS has them listed as a lucite purse. There is even a lucite purse book that includes it. If you want to use one as a purse I think that's great and I'm sure it looks very cute, I just want people to know what it really is and not get tricked by a seller claiming that it's some ultra rare 50s designer piece worth $180 (seen that too). They're not rare and they're not lucite. They're worth about $20 at the most. At any given time you can find at least ten online for sale.

And that concludes my Vintage Public Service Announcement. Back to packing orders...
posted by Lisa at 1:36 PM 3 comments:

This dress is a lesson in persistence when thrifting. I found it at a store I usually have no luck at, and I had been there just a few days prior, again with no luck. I stopped by this time to find 50s hats for a dollar, 50s hostess aprons for a dollar (the really fancy kind, not the basic cotton), a 50s purse for four dollars (keeping), train cases (can't keep them in stock at the store), a 50s Lefton Halloween figurine and this amazing dress. It's made of the softest silk velvet and closes up the side with a ridiculous amount of snaps. It's well loved, some pearls are missing and a side seam needs to restitched.

I adore it and it will stay in my collection until I'm having an estate sale of my own (which will be one of the coolest estate sales EVER, by the way.)
posted by Lisa at 6:03 PM 1 comment:
Labels: my finds, vintage hunting

This is probably my new favorite thing in the store...I may have to take it out and put it in our apartment...I don't think I can part with her.
posted by Lisa at 10:00 PM 1 comment:
Labels: my finds, the store

This was airbrushed on a car dealership by my old apartment.

Not a transfer, all airbrushed.
posted by Lisa at 10:31 PM No comments:
Labels: amazing

I'm finding that another perk of having the store is that nice people find out what you collect and then bring it straight to your door from their 92 year old mother's estate...

Anatomy of My Bulletin Board

This is next to my computer in the store and was supposed to be a place to stick notes about orders and to-do lists but it ended up slowly becoming a hodge-podge of things I love:

1. My feline sons. Very important.
2. A little piece of beading and prong set rhinestones from a dress that likely disintegrated years ago.
3. Vintage corsage pin.
4. Skeleton key escutcheon that I printed out for a tattoo a long time ago (but ended up going with a different one).
5. Little 13 cents general store price sign...I'd love to know what cost 13 cents (13 is my favorite number).
6. Lucille Ball. Enough said.
7. My maternal Grandma. RIP.
8. Fredrick and Nelson tag out of a 1950s coat I ruined cleaning and still feel guilty about. My Great-Grandma in #16 worked there for a little bit in the cafe.
9. 1920s photo of two girls holding hands.
10. Business card for a local store I like.
11. Original tag off a (formerly) NOS 1950s dress in my collection.
12. Razorblade for annoying customers. And also scrapping sticker residue off things.
13. Photo out of the album that I got when I was 11 that I credit kicking off my love of all things old. The woman in the photo was the owner of the album.
14. Playing card that was in an order from simplychictiques on Etsy (one of my favorite stores on there).
15. 1955 Buick ad (my favorite car).
16. My Great-Grandma (right) and Great-Great Grandma.
17. Lady Luck sticker that I bought to put on the wing window of my Falcon...three years ago.
18. A (copy of a) 1934 picture of the building my store is in (in the basement). It was taken by the mother of an employe of the antique mall on April 21st (which happens to be my wedding anniversary) right after it was built. There has been an addition added to the left side and other things built around it but other than that it looks pretty much the same...
19. A 1951 baby picture of my Dad with his Grandparent's (his Grandma in #16) cat Zeke...one of my favorite pictures ever.
20. 1950s ads for bust cream.
21. A 1969 reciept for fabric I just can't throw away. Found in a much older chest that I use to hold the linens in the store.
22. Random bride on phone from a magazine, I think it's from a movie.
23. A mysterious 1950s mug shot that I found at the Goodwill Outlet.
posted by Lisa at 3:31 PM 1 comment:

I paid $20 but there is no amount of money that could part me from them!
posted by Lisa at 9:21 PM No comments:
Labels: cat lady, my finds
Older Posts Home
Subscribe to: Posts (Atom) 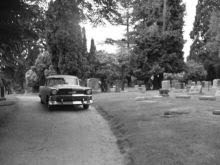